DISCLAIMER: This is my very first attempt at 8-bit hardware development, first
time using assembly ever, and only the second game project I've ever come
close to completing. At least it works! (The assets will likely be reused for
a legitimate RPG adventure title that is in planning.)

BACKGROUND: You are Aomaru, or Ao-kun for short. You are a ninja -- or at least
you're training to be one. One day while you were away from your home village,
it was besieged by the undead! A particularly nasty one that goes by the name
of Guy Kotsu is patrolling the mountains and woods searching for you -- to
KILL YOU!

As the surprisingly agile skeleton scrambles over mountains to remove your
entrails, you remember your training - by gathering all four of the Mystic
Elemental Scrolls and returning them to your home, you can prepare the  magic
that can exterminate the undead threat! Good luck, Aomaru!

HOW TO PLAY: ***Use Joystick Port 2***
Move the joystick to move Ao-kun and press fire to throw a shuriken. You can
have three shurikens on-screen at a time. Hit Guy with the shurikens to stun
him for a few brief moments. Be careful, sometimes he is barely stunned at all!
Move to the edge of the screen to move to the next screen. Walk over scrolls
to pick them up, once you find them. Once you have all four, return to the
start position and walk over the town to win!

If you are touched 3 times by Guy, you die and the game is over. Press fire to
restart your console. A failed game over differs from the winning game over by
being a black screen instead.

Craptastic bugs:
-Guy is invincible around x position ~255, but not to the left or right of it
-Shurikens fly off into the gui at x>255
-Clear screen subroutine doesn't quite clear the screen

This is a .PRG file, intended for use with either an emulator or actual Commodore 64 hardware.

It has been tested on both emulator and real hardware with a joystick.

Dear tekkamansoul, may I please re-share your games (not just this one:) on my github project page?  What license may I use, please? More details about the project in my profile --> https://retrobrews.itch.io/ Thank you in advance! Retro Fan

Thank you very much for your approval! Backlink will be provided in description file as for the other games. ;)

Cannot wait to have my entrails removed by the agile skeleton!

It's the bee's knees! 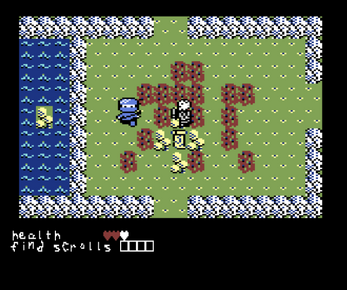